Imagine you are a girl growing up in a blue color town where “other people in (your) neighborhood aren’t thinking about college or careers.” 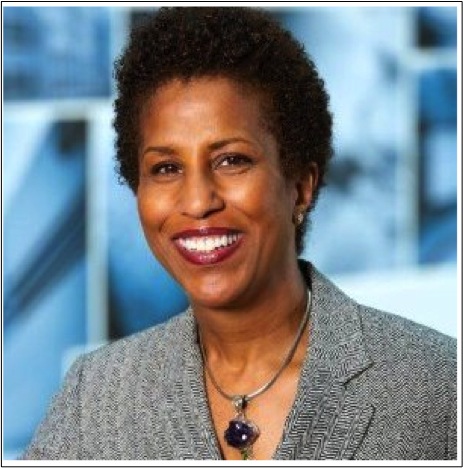 Imagine that you are really smart but you don’t know anyone like you who is a professional. Sandra Rogers,VP of Global Maintenance for NetJets doesn’t have to imagine this scenario, she was that girl.

Sandra began to have glimmers of the possibility of a life beyond this environment while a teenager. A pastor’s wife, not that much older than Sandra, had a college education and was the first professional black woman that Sandra knew personally. Her parents, valued education (even though they did not have college degrees) and recognized that Sandra was smart; they encouraged her to leverage that intelligence. Fortunately, Sandra was invited to attend a college preparatory high school where teachers “pushed me and pushed me.” Additionally the teachers knew of opportunities and relentlessly urged Sandra to pursue them.

Sandra didn’t know anything about engineering but her strong math aptitude made that an obvious avenue. Purdue University had (and still has) a series of summer programs to expose women and minorities to engineering. At the exhorting of her high school teachers she attended Purdue’s summer program. For the first time ever Sandra was surrounded by other young women like herself. It was invigorating. Sandra returned for a second summer and was inspired to study hard and become an engineer.

She then returned to Purdue for college. During one of her very first internship experiences Sandra realized that “engineering was not for me.” She needed more people interaction and leadership opportunities than a pure engineering role provided. This realization did not derail Sandra in any way. She continued to earn her engineering degree, understanding that the analytical experiences provided by the coursework yielded invaluable skills.

While engineering was not the right fit it immediately became apparent that management and leadership were!

Even as a brand new supervisor (at General Motors) Sandra understood that “to get work done she had to motivate people.” Motivating people decades older than her, people who were skeptical about this petite young African American woman, was not easy but was incredibly satisfying. She went on to earn an MS in Manufacturing Management from Kettering University.

Upon completing her MS she joined GM full time. The 1990’s were an exciting time to be part of the auto industry and GM. Sandra was assigned to the NUMMI joint venture with Toyota. As part of a team that consisted of both Toyota and GM supply chain mangers she was among the first in the US auto industry to learn and applying lean manufacturing principles.

Returning to Michigan Sandra was charged with transforming a traditional facility to a lean environment. Some rank and file workers were excited by the innovations but others were fearful. In this process Sandra honed her ability to identify the natural leaders and engage them in the transformation. Listening and observing helped her identify quick gains to get employees on board. Utilizing metrics (through old school visuals, flip charts and posters) she helped transform the distribution and logistics function.

Two to three years later it was time for another move (both geographic and functional). Sandra wryly noted that she “gets bored easily” and when things are “too comfortable” it’s time to move on. This next move was from a facility to a headquarters role; from a tactical to a strategic perspective. The shift from hourly production goals to long term ones was a big one. Sandra observed that leaders rarely traversed this chasm, usually focusing either on the operational or the strategic level. Nonetheless she appreciated (and mastered) the new strategic challenge.

By the time Sandra had spent nearly two decades with General Motors she realized that if she ever wanted “to make a change now was the time.” The industry and company were retrenching. Benchmarking outside the auto industry helped expose Sandra to other companies and industries. Nonetheless, her entire career had been with General Motors. Deciding to explore other options was the “toughest decision” she ever made. At General Motors she “knew the players and they knew me. I knew how to get things done. I knew the industry and the language.”

Through a headhunter Sandra landed at Honeywell Aerospace in Phoenix, Arizona. She had no mentor or sponsor. She was in a new industry and a new company in a new state. The “first few months it was like speaking a foreign language” Sandra told me. Sandra attributes her successful transition to her manager who was also new (so they were navigating the territory together). He became a mentor and sponsor. He was her “confidant and life saver.” He was also a fantastic leader who established a clear vision but empowered her to implement as she saw fit. He held “me accountable with clearly defined metrics” but provided the crucial support to achieve them. This sounds to me like textbook leadership, often cited but too rarely experienced!

A few years later, Sandra crisscrossed the country (again) to another Honeywell division in Kansas City, Missouri. Once again she was in an entirely new organization with its own unique challenges. Each transition found Sandra “outside my comfort zone” and “learning things I hadn’t been exposed to.” Yet with each transition Sandra has leveraged her formidable leadership skills and her capacity to learn.

And in each transition she has sought out mentors and sponsors. Both men and women have served in this role and Sandra credits them with “pivotal significance” in her career development. Sandra believes that her rapid career trajectory is in part due to their willingness to help her, to critique her and to provide her with visibility.

Sandra plays this role for others too. While she has participated in formal mentoring programs she believes that mentoring and sponsorship works best when it occurs naturally. She relishes helping someone who “reminds me of myself” or who “has a lot of potential but hasn’t received the feedback” needed to succeed. She sees her job as “making people on my team successful, helping them, shoring them up and providing them with honest feedback.”

Sandra’s most recent move (a bit less than two years ago) found her once again in a new industry and a new state. She is now Vice President (Global Maintenance) for NetJets. While the title, the industry and the state may be new, Sandra’s primary role is not. Once again she is leading a change initiative; she is using her leadership skills to transform an organization. The little girl who grew up not knowing any professional women has become an outstanding leader and role model.

2. Some of the companies mentioned in this blog have been past clients of PAKRA and its executive team.

Tweet
Tags:
Lean metrics Operational Excellence Operational Maturity Six Sigma
"To become a trusted advisor, first listen, then l...
"Lead in a way that people will want to join your ...

Can you measure the ability to de-escalate? De-escalation is a required skill for sales and customer service reps