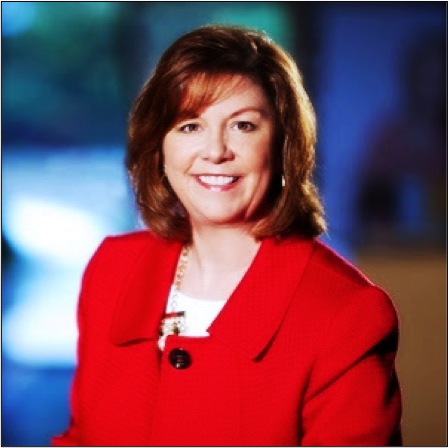 was finishing high school her options seemed to be: get married and have children or become a nurse, teacher or flight attendant. Since being a flight attendant involved travel that seemed the best choice.
Barb’s wanderlust extended to her “bohemian phase” which involved a variety of jobs in a variety of locations, including a stint at an “all-girls gas station.”
So how did she go from “tinkering” to writing an acclaimed sales blog and being named a “top 50 sales influencer?”

“There are no accidents in life” Barb believes, “everything happens for a reason.”

The reasons aren’t always immediately evident but they emerge over time. In retrospect the twists and turns seem almost preordained, but at the time they were often leaps of faith.

The first serendipitous turn was when Barb, who is not particularly fond of math, found herself working in an accounting department. The department just got its first main-frame IBM computer and Barb was intrigued by the technology. Her Dad had always “tinkered and fixed things around the house” and Barb learned from him and helped him. Tinkering with the computer seemed like second nature to her. She helped figure out the reports that they would need and explored how this new technology could help them do their jobs more effectively and efficiently. Creativity and ingenuity combined with the confidence that as an inveterate learner she could “figure things out.”

Similarly, when six months later, a friend told her about an inside-sales position at Ingram Micro she leapt at the opportunity. Even though she had limited knowledge of computing and no experience in sales she intuitively knew that her passion for people combined with her love of tinkering with technology would suit her for software sales. She assured the hiring manager that if she were given the opportunity she would become a stellar sales person. Four years later she won “Sales Representative of the Year!” Her self-confidence and persistence paid off for both Barb and Ingram Micro!

Barb’s career continued its upward trajectory in a variety of technology focused sales manager and director roles. Within a decade she was a Corporate Account Executive at Microsoft, with responsibility for a myriad of Fortune 500 accounts. Barb’s career at Microsoft blossomed as the company grew from a relatively small (under 10,000 employees) to a mammoth corporation. The best thing about Microsoft was “the ability to learn and grow” her skill set while working with the best and the brightest.

Barb also benefited from an inspirational manager who embodied the sponsorship mentality. He “was always on the lookout for how I could increase my visibility and my skills.” She emulated him and sought to hire and promote dynamic individuals. Rather than being threatened by their star potential she felt that everyone benefited when she could “hire awesome people” and “remove the corporate stumbling blocks” from their path while “providing them with the tools they needed to succeed.”

Experience was far less important than attitude and mind set. Barb, whose interview questions were notoriously challenging, wanted to see how candidates thought, how they responded under pressure, how they could handle tough situations. She didn’t want “pat answers” or “canned responses.” Barb loved having the ability to attract, hire and develop smart, creative people.

It was an exciting time for both Barb and the company. She joined Microsoft as it was rapidly expanding. She rose to National Sales Director for the Consumer Division. She went on sales calls with Bill Gates and Steve Ballmer. Heady stuff for a woman whose early life was hardscrabble and her early opportunities seemed constrained to teacher, nurse or flight attendant.

But, as Microsoft grew, so did some of the frustrations of working within a large company. By the time that Microsoft employed 35,000 Barb felt the siren call of entrepreneurship. She felt compelled to strike out on her own. Becoming an entrepreneur was the “best and dumbest decision I ever made” she told me. Best because it provides endless learning opportunities and allows her to do what she loves. Dumbest because she hadn’t, at least initially, fully considered all the implications of being on her own. Now, more than thirteen years into piloting her own destiny she wouldn’t change it for anything.

When Barb first embarked on her own she focused on traditional sales training and development. A passionate advocate for the professionalization of the sales function Barb provided guidance to organizations on how a more professional and better-educated sales force could effectively achieve corporate goals through consultative selling techniques. She helped organizations identify opportunities and provided the training. Like most entrepreneurs she did pretty much everything that needed to be done.

Over time Barb developed an extensive network of partners and collaborators. This has enabled Barb to focus on the things that she loves best. Unsurprisingly one of the things that Barb loves best is selling! She likes nothing better than conducting a sales call. Typically she has been approached by the organization (her reputation and extensive social media presence encourage people to contact her). During the (generally) thirty-minute conversations Barb learns about the organization and its challenges. She probes to really understand the crux of the issue. The last five minutes might include ways that her organization could help.

Barb wasn’t always the “go to person” for social selling. Early in her entrepreneurial career it didn’t even exist as a term or a phenomenon. Barb started learning about social media in her ceaseless quest to do things better. Social media was brand new; this was 2002, before Facebook (2004), Twitter (2006) and about the time LinkedIn (2002) launched. Ever the inveterate “tinkerer” Barb loved learning, playing with and exploring these new tools. Barb quickly realized that they were a “game changer” for businesses and especially sales representatives. She had found her niche.

By 2006 Barb was evangelizing the power of social media in sales. Unafraid to learn (and try) new things Barb began blogging in addition to her other activities. Blogging led to podcasting. Barb currently hosts two podcasts; one focused on sales and social selling, the other more eclectic focused on disruption. She helps corporations understand the power of these new and quickly evolving tools. She made herself the “go to” person in social selling through her tireless learning and teaching about their power. In 2012, her article “Tweet me, Friend me, Make me Buy” appeared in the prestigious Harvard Business Review.

Provocatively, this queen of social selling has declared the “end of social selling.” Do not be misled into thinking that it was simply a passing fad, quite the contrary! One must be involved in social media not because it is a panacea but “because that is where people start.”

Social media has now matured to the point where it is simply one more tool in a manager’s tool kit. We all need tools to succeed. What those tools are and how to leverage them is constantly changing. Successful individuals will, like Barbara Giamanco, continues to learn and leverage the right tools to solve current challenges.

Tweet
Tags:
Sales Leadership Women in IT Women in Leadership
"Ability to solve problems is key to successful ex...
"Use well-defined metrics to drive success", says ...