How does someone go from an artistic high school student to a chemistry major to a litigator and law partner specializing in employment issues? 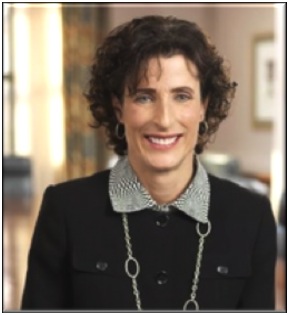 partner at Carlile Patchen & Murphy LLP and President-Elect of the Columbus Bar Association having it “in your genes” helped but relentlessly pursuing intellectual puzzles with a dash of practicality was a significant part of the equation.

Brigid’s parents were partners in a small town law firm, and growing up Brigid was pretty clear that she didn’t want that for a career!

But determining what she did want was a challenge because she had a myriad of talents and interests.

An artistic child, Brigid considered architecture because it was “more practical than being an artist” and included math, another one of her passions. By the time she arrived at OSU’s prestigious College of Engineering she had discarded architecture as a career path.

The first year engineering sequence dissuaded her from that path (due to a lack of interest not a lack of talent). Eventually Brigid settled on being a chemistry major because she loved the intellectual challenge (Organic Chemistry, the bane of many a pre-med student, was her favorite class). She didn’t want to be a scientist and the thought of medicine made her squeamish but the analytical aspects of chemistry and physics were her sweet spot. As her college career progressed she decided that law school might be a good plan; it preserved her options and patent law might be a way to marry her science side with the legal side.

During her first summer as a law student Brigid was thrilled to land a summer associate position in a boutique patent law firm. Excited to have the opportunity, Brigid dove in with her usual passion and discipline only to discover that the work of being a patent attorney was not a good fit. But that summer Brigid did discover her legal passion: litigation! She returned to law school and promptly dropped the patent law class she was enrolled in and added as many litigation focused courses as she could schedule. Upon graduation she clerked for Justice Alba Whiteside at the Tenth District Court of Appeals, learning about trial procedures and strategies and meeting many attorneys who would mentor and guide her.

Brigid has been mentored by and has mentored many attorneys both men and women. Early in her career she become actively involved in the association group, Women Lawyers of Franklin County, eventually becoming president. This group, run by and for women provided many inspirational role models as well as leadership opportunities.

Brigid continues to “pay it forward” to the legal community and beyond. She regularly “reaches out to promising female attorneys.” Perhaps this is just being savvy since one of her roles as a hiring partner is talent acquisition!

As a female litigator, Brigid is still in the minority. According to Brigid, litigation and transactions remain

“tough fields for women to practice in, partially because they require demanding hours and allow the least control over one’s schedule.”

You can’t schedule a trial around your personal life and a transaction must be completed when it’s best for the client. Nonetheless, Brigid has seen an increase in women litigators over her career. She wryly noted that at a recent trial all of the attorneys in the case, as well as the judge, were women, which was in sharp contrast to her early career when she was often the only woman in the court room.

Brigid is passionate about practicing law and the legal profession, however Brigid knows herself well enough to understand that the law cannot be the only passion in her life and she encourages others to “know what makes you happy.” Consequently she deliberately chose to practice with a mid-sized law firm, where she has more control over her schedule than she would in a large firm. She deliberately makes time for family, for vacations, for the outdoors, for artistic pursuits and for another significant passion, golf.

“Golf is a game about life” Brigid observed. “There are ebbs and flows. The rules are out of your control.”

Sometimes things break in your favor and sometimes they don’t. Persistence and practice yield improvement. All good life lessons! And it doesn’t hurt that golf provides unparalleled business development and networking opportunities! Where else can you routinely spend six or more “quality hours” with clients and prospects?

Despite these benefits discrimination remains rampant in golf. Golf is usually played at private clubs and these private clubs can, and do, discriminate by gender (among other things). Women are routinely denied membership and access. “Men Only” grill rooms and well-equipped men’s locker rooms (which sometimes include their own bars and lounge areas) exclude women and it is in these restricted areas where much of the pre- and post-play socializing and relationship building opportunities arise.

Denied access, women lose out on significant business development opportunities. Brigid notes “these policies could be instantly changed,” but clearly some men enjoy the exclusivity and are uninterested in voluntarily opening access to women. She hopes that the next generation of women takes on the challenge of “breaking down this, and other remaining barriers.”

Nonetheless Brigid “question(s) if young women appreciate the changes that have been given them--opportunities I never had and that my mother certainly never had!”

You may recall that at the outset I referred to Brigid’s “genetic destiny” to become an attorney; both of her parents were attorneys.

While women currently outnumber men in law schools(2) that is a relatively recent phenomenon! When Brigid’s mother graduated from OSU Law School she was one of two female students in her class and the other woman never practiced law. Her trailblazing mother demonstrated a fierce determination to become an attorney despite indignities too numerous to mention. While Brigid chose a different legal path, clearly she shares her mother’s passion and determination.

1. This interview has been edited and condensed.
2. This is a reference from http://www.americanbar.org/content/dam/aba/marketing/women/current_glance_statistics_july2014.authcheckdam.pdf

3. PAKRA is a client of Carlile Patchen & Murphy.