Let's Nudge Ourselves to a More Inclusive Definition of Gamification 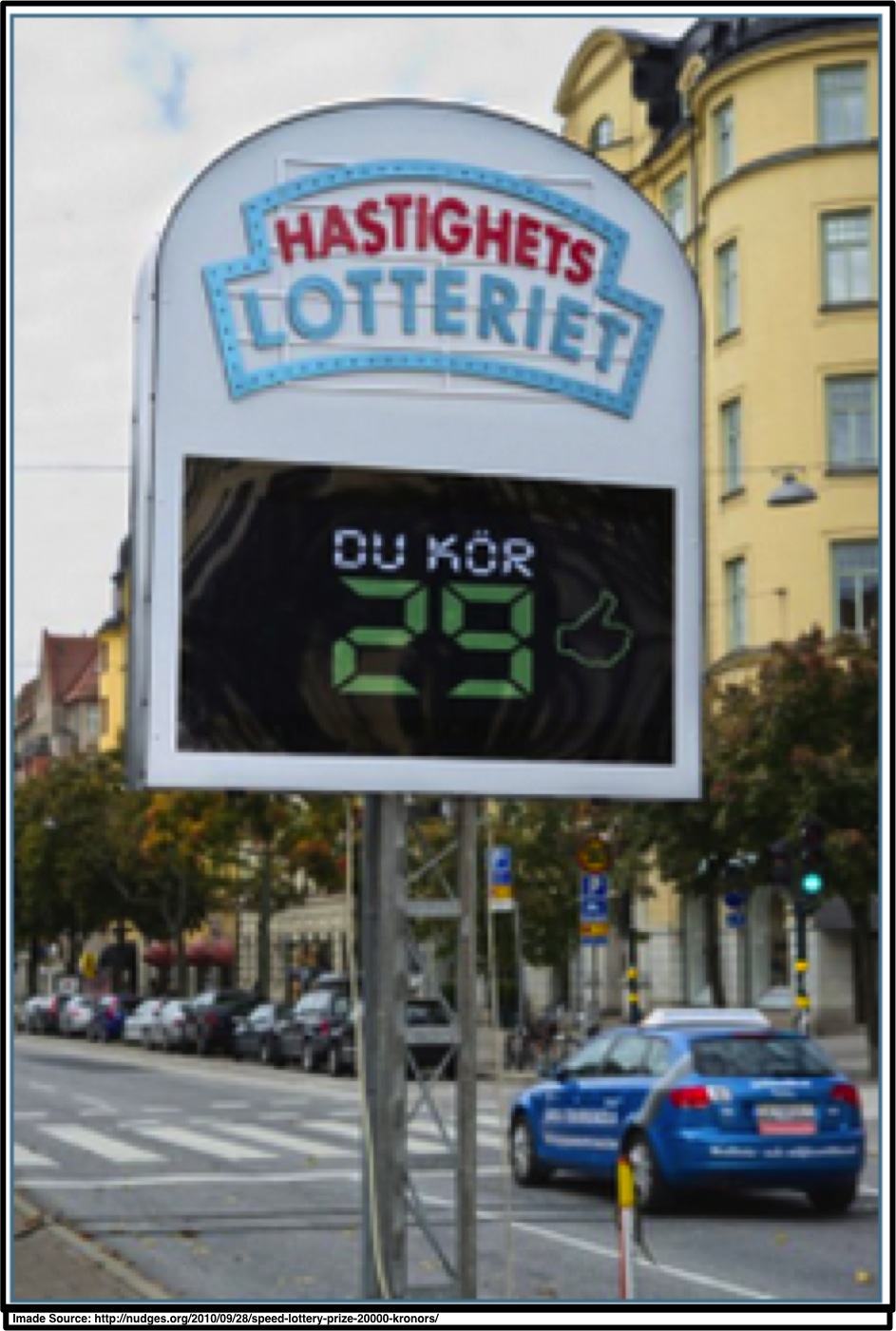 In their seminal book Nudge: Improving Decisions About Health, Wealth, and Happiness, Richard Thaler and Cass Sunstein discuss how to design mechanisms that “nudge” individuals suffering from “status-quo bias.” The goal is to improve the decision-making of individuals who practice “mental accounting” by “anchoring” at specific values when making choices.

Thaler and Sunstein share a story about a lottery designed to reduce speeding in a town in Sweden. Everyone is familiar with “Your Speed is __” markers set by the road to spur drivers to reduce their speed. What this Swedish town did differently—as pictured below—was to choose cars randomly for registration in a lottery if they slowed down. Drivers did not know whether or not their lottery registration depended on slowing down—yet the lottery had the intended effect, which was to induce drivers to pay attention and slow down at a greater frequency than they would in the absence of a lottery. This was a clever (and easily implemented) system for nudging behavior by offering a reward. 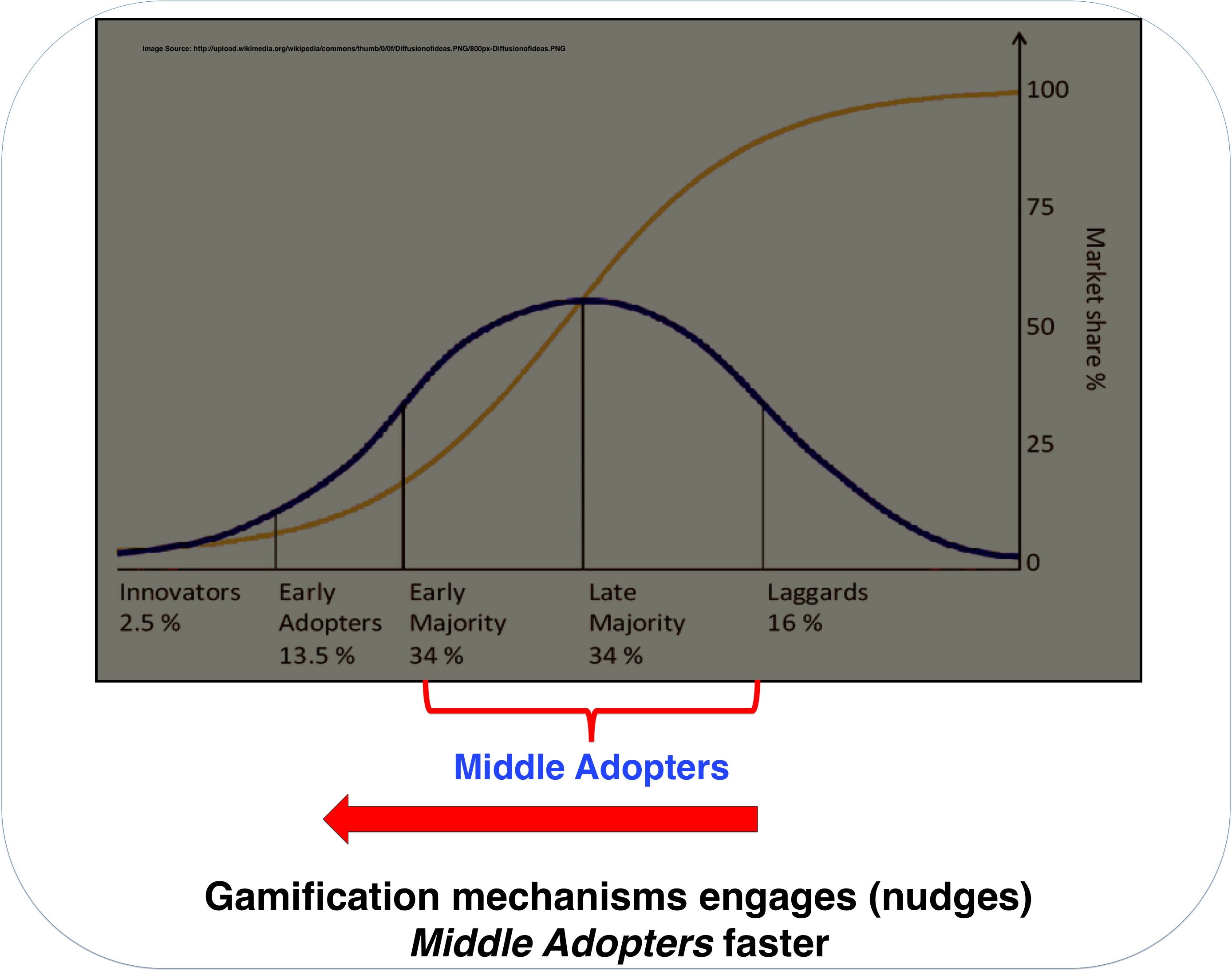 This brings me to Rogers’ Bell Curve, popularized by Geoffrey Moore in his book, Crossing the Chasm.

When confronted with new products, ideas, technologies, etc., some people adopt very quickly as “innovators,” others follow as “early adopters,” others are “middle adopters,” and the rest are “laggards.” As shown in the diagram below, the distribution of “types” tends to follow a bell curve. This empirical regularity in the adoption process (known as Rogers’ Bell Curve) was first discussed by Joe M. Bohlen, George M. Beal and Everett M. Rogers in a 1957 analysis of farmers’ adoption of new hybrid corn seeds.

In deciding whether to be innovators, early adopters, middle adopters, or laggards, individuals tend to rely on the anchoring and mental accounting studied by Thaler and Susstein. This brings us to the question: How do we nudge individuals to adopt more quickly?

The solution is obvious: design “easy-to-use” mechanisms that nudge individuals into quicker adoption. Fortunately, we have an entire industry dedicated to designing such mechanisms. These nudging Gamification designs go by many names: Serious Games, Meaningful Play, Pure Game Mechanics, and Gamified Environments.

PAKRA and other companies in this industry are dedicated to designing mechanisms that help customers, employees, and even farmers reduce status-quo bias and adopt more quickly.

And these mechanisms work:  An emerging literature shows how Serious Games, Meaningful Play, Pure Game Mechanics, and Gamified Environments make middle adopters embrace new products/services, new technologies, new processes, new “anything” more quickly than they otherwise would. On a related note, the industry may be new but the ideas are not: The use of Games to plan, adopt, and change behavior (while having fun) goes back thousands of years; in fact, many game-related mechanisms stem from warfare and conflict resolution.

For the nerds, here is a quick overview of how some of these terms originated:

1. Serious Games was first used by Clark Abt in 1970.
2. Meaningful Play in game design was introduced by Katie Salen and Eric Zimmerman in 2003.
3. Gamification was introduced into business-speak by Nick Pelling in 2002.
4. History and classification of Game Mechanics can be found in Game Mechanics: Advanced Game Design by Ernest Adams and Joris Dormans.

To us any mechanism that nudges people to adopt and change behaviors is a Gamification mechanism.

Despite its storied history, in the past few years I have repeatedly encountered controversy (see references) surrounding what is (and is not) included in Gamification.

Controversy 1: Gamification consists only of pure game-mechanics; Serious Games are excluded from Gamification.

If you Google the phrases game mechanics, meaningful play, gamification, and serious games, you will find blogs, articles, slide-shares, videos, and books in which the authors parse the differences among these concepts. Rajat Paharia, CEO of Bunchball, is among those advocating that we exclude serious-gamified environments and include only pure game-mechanics in our definition of gamification.

In an April 2014 blog by Brian Burke of Gartner, gamification was redefined to include digital play only. This, in turn, led to many heated web discussions on the subject.  In his blog, gamification expert Andrzej Marczewski pointedly wrote: “Gartner has now stated that gamification is nothing more than technology, and without technology, it is nothing.  Whilst we know that is nonsense, the readers of Gartner don’t.”

It boils down to this: Do the individuals, businesses, and organizations that we are trying to “nudge" care about these epistemological kerfuffles?  What they do care about are the following:

These questions should lead us to gain a deeper understanding of how business processes work, and individuals learn and make decisions—and then we should use gamification to nudge customers to engage and adopt to our products and services faster, and to nudge employees to learn and adopt to change more quickly.

We’ve all heard the adage “If all you have is a hammer, everything looks like a nail.”

As Gamification experts, we can be more helpful to our customers if we are more inclusive. Let’s ask what problem needs to be solved, and then figure out which tool in the gamification tool-kit is best-suited to fixing that problem.

4. “The Failure of Most Entrepreneurial Technological Innovations to Diffuse: What the Literatures Say”; E. O. Chukwuma-Nwuba; International Journal of Management Sciences; Volume 1, No. 11, 2013, pages 463-470

Controversy 1: Serious games is not gamification

8. “The Gamification of Learning and Instruction: Game-Based Methods and Strategies for Training and Education”; Karl Kapp; Pfeiffer and ASTD, 2012.

Controversy 2: Non-digital engagement is not Gamification

Follow us on Google+
Tweet
Tags:
change management user adoption Nudging behaviors serious games gamification
"Invest in the people who work in your organizatio...
Gamification Applied to Employee Engagement: Is i...

An application of Gamification to Sales Process, Sales Accountability and Sales Training

An application of Gamification to Customer Service Processes and Learning

How can LinkedIn help with your social selling efforts? Conversation with Ralf VonSosen, Head of Sales Solutions, LinkedIn.